We may have known that walking makes us feel better, but who knew that it can actually make us think better? Neuroscientists are now learning that the brains of older adults who take brisk walks a few times a week function more efficiently than the brains of those who don’t. It seems that walking builds up the brain’s white matter, basically its wiring. And it does this more effectively than other forms of exercise, such as dancing and stretching. To read more about this amazing discovery, check out this recent article in The New York Times. 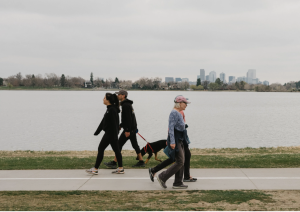 Exercise can freshen and renovate the white matter in our brains, potentially improving our ability to think and remember as we age, according to a new study of walking, dancing and brain health. It shows that white matter, which connects and supports the cells in our brains, remodels itself when people become more physically active. In those who remain sedentary, on the other hand, white matter tends to fray and shrink.

The findings underscore the dynamism of our brains and how they constantly transform themselves — for better and worse — in response to how we live and move. (Read more—type walking and the brain in the search bar)