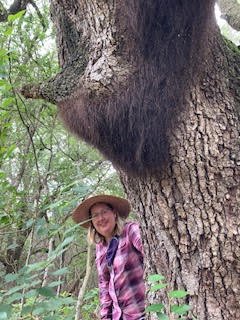 Kelly Eby, urban forester for the City of San Marcos, checking out a harvestman nest.

Have you ever been on a hike and think you see a tree with an unkempt beard? Ok, maybe that’s just me. Daddy-long-legs, or harvestmen, build spectacular nests in our Natural Areas that look like big, hairy masses on the sides of trees and rocks. Harvestmen are often seen in the late summer and fall or harvest time, hence the name.

Interestingly, although they are arachnids, they are not spiders. Unlike spiders, which have segmented body parts, several pairs of eyes, fangs, and venomous glands, harvestmen have one body segment, only two eyes, and no venomous or silk glands. So they do not spin webs.

They pose no threat to humans. A defense mechanism they employ with predators involves sacrificing a leg. A predator will often attack one of their delicate, long legs, which will easily detach and continue to twitch for some time. This can confuse the attacker and allow the harvestmen to run away, albeit with a bit of a limp.

So when you’re out hiking, keep an eye out for these amazing creatures.  And if you see one with a hitch in its giddy-up, give it a thumbs up.

Written by Diane Phalen, Vice-President of SMGA, trail crew member, and member of the Outreach Committee